It Works Both Ways for Divorcing Spouses: Men Can Receive Alimony Too in New Jersey

As women become a larger part of the workforce, their wages sometimes surpass those of their husbands, meaning more and more women may have to support their partners financially after divorce.

The way divorce settlements are resolved is changing. 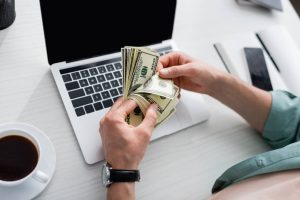 One considers the wife in the partnership to be the recipient of alimony, but a trend has begun that is turning the tide. As women are more self-sufficient and go further in their careers, their salaries sometimes exceed those of their husbands, and the frequency of alimony payments to men has changed accordingly in New Jersey.

Defining the Concept of Manimony

When there is a divorce settlement, the popular belief is that alimony is paid from the ex-husband to the ex-wife. Times are changing, and more women make up the workforce than ever before. As couples choose to marry in their late twenties and thirties, both can build a solid career for themselves before they ever go to the altar, and sometimes that means the man isn’t necessarily the one who earns more. Of course, more factors than income determine alimony, but it is an important one. Manimony is the term for alimony received by the former husband.

In the 1960s, women headed out into the workforce and got college degrees to create an independent life due to the women’s rights movement. Gone were the days dedicated exclusively to being at her family’s beck and call. The modern woman was setting a path for herself that was previously out of reach. Decades later, women are company CEOs, press secretaries for the White House, judges, teachers, and reporters; the sky’s the limit. Women are making more money now than ever, and although there is more terrain to be explored, they continue to hurdle the barriers preventing them from further progress. However, things have already changed substantially for women’s job opportunities and the changing landscape of spousal support reflects these changes.

The Uniform Marriage and Divorce Act, ratified in 1979, guaranteed either spouse the right to alimony. Until then, typically, the woman was paid alimony to maintain her lifestyle and compensate her for sacrifices of career and education during the marriage. Men, entitled to the same circumstances, also began to seek alimony. In the 1980s, the number of men requesting alimony increased slightly from previous years, and movies such as Mr. Mom, 3 Men and a Baby, and Look Who’s Talking reflected a concept that was already taking shape. The stay-at-home dad was much more common.

When are Men Entitled to Receive Alimony in New Jersey?

A recent study found that in approximately 40% of households, the woman makes more than the man. 2 million families across the country have stay-at-home dads, and the wife works full time, supporting the family.  If the ex-husband stays at home with the children and works at a job that pays significantly less, he is most likely entitled to be paid alimony. In addition, if a divorcing couple has a disparity in their earning capacity, education, and current salaries, the wife earning more may have to pay spousal support to her husband after the dissolution of their marital union.

What are the Criteria for Determining a Husband’s Spousal Support Payments?

Manimony is determined in the same way as regular alimony, except the traditional roles are reversed, and the woman must pay alimony to the man. Obviously, the first factor taken into consideration is income. If the ex-wife earns more than her husband, she may have to pay him. Age plays a part; in how much longer both will be in the workforce and if there is still time to receive training or additional education to facilitate finding a job that would keep the ex-spouse able to maintain the same standard of living. Also, another important factor is any investments, properties, or other assets owned by one or both spouses. Once the final dissolution of the marital assets has been determined, the judge will request a CIS (Case Information Statement) from each party which lists important and detailed financial information. 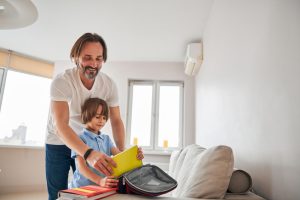 The two most important factors are the duration of the marriage and the disparity between the parties’ incomes. In New Jersey, alimony cannot last longer than the duration of the marriage, so if the marriage lasted 13 years, alimony would last 13 years or less, depending upon the circumstances. That being said, if a judge is biased and scrutinizes the ex-husband, awards may be significantly less and for shorter periods than alimony awarded to women under similar conditions, even when the ex-husband retains custody of the children.

Mixed Responses to Men Being Paid Alimony in NJ Divorce

For some, the mentality surrounding manimony is far from the law that upholds equality. It is too often assumed that a man can return to the workforce much more quickly than a woman, so his support should be shorter in duration and less. This is of course unfair to ex-husbands who only want the rules to apply equally. Often, men do not want to receive alimony because they feel shame at not being able to fend for themselves. There is a stigma attached to receiving maintenance from a woman, even if she is your ex-wife.

On the reverse side of the coin, women who pay spousal support may scoff as they write the check, upset by the need to financially support a healthy, capable man. Women fight for equality, but when that equality comes to fruition through spousal support, the result can be rather unappealing. So just as there are husbands who avoid divorcing their wives to save themselves from having to pay support, there are also, most assuredly, women who do the same. Most people are not thrilled to hear how much and how long they have to pay their ex after a divorce, regardless of whether the husband or wife is the one paying.

Divorce can be messy and stressful, especially when unsure if and how much you will have to pay alimony. Sorting through financial records and important documents while contemplating the result of what could be a costly support plan can be unnerving. Or perhaps you want to petition to receive alimony. You are well within your rights and need excellent representation.

It would be best if you had an experienced divorce attorney with the experience and knowledge to provide you with the best outcome possible. Montanari Law Group has years of practice in divorce matters, including the most complex financial issues with division of assets and spousal support. We are fully acquainted with New Jersey divorce laws, procedures, and unique aspects of high asset divorce cases, and divorces involving stay at home parents. You deserve to be represented by lawyers who have your best interests at heart and are prepared to be with you every step of the way.

If you are seeking spousal support as a husband or facing the prospect of paying alimony as a woman in West Orange, Montvale, Paramus, Haledon, Elmwood Park, Montclair, Ridgewood, or other Passaic County and North New Jersey neighboring towns, now is the time to call the Montanari Law Group at (973) 233-4396, toll-free at (888) 877-7985. You can also contact us via this convenient link. You don’t want to wait to get answers, so schedule your free confidential consultation today.