If you have been charged with graffiti under the New Jersey vandalism law, you will need excellent representation in court to minimize or avoid many consequences, including jail time.

What are Graffiti Charges in New Jersey? 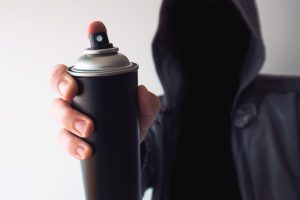 Spraying graffiti on any surface other than something you own outright is a criminal mischief offense in New Jersey. If you’re caught, charges can be brought against you, and you could end up with a criminal record. This will have harsh consequences on your life. It will make acceptance into college and landing a job incredibly more difficult. You may lose your freedom and be put in jail. In addition to these consequences, you may have to pay a large fine, pay the owner of the property restitution for the damage done, and be required to spend time performing community service.

In New Jersey, graffiti is not considered separately but is lumped in with all forms of vandalism, falling under the criminal mischief statute. This statute makes it a crime 1) to purposefully damage someone else’s tangible property by employing fire or explosives or any other dangerous means, and 2) to purposefully or recklessly tamper with someone else’s property in a way that endangers person or property.

Because of this statute, you can be cited for criminal mischief, not just for spraying a wall with paint. Instead, it includes defacing property of any sort—a wall, a car, a building, a bridge—even if you consider it to be artistic.

Making a mark of any kind on someone else’s property (publicly or privately owned, it makes no difference) without the owner’s expressed permission will be considered graffiti. This can include carving your name into a wooden desk or bench.

What are the Punishments for Vandalism in New Jersey?

What Are the Consequences for Juveniles charged with Graffiti Offenses in NJ?

In New Jersey, fortunately, a minor charged with graffiti offenses does not get caught up in adult criminal court or get put in adult prison. They do go to juvenile court, however, and if convicted of the charges, may even be placed in a detention center for juveniles. They will likewise end up with a juvenile record. Although this may not have the same effect on landing a job or going to college as having an adult court record does, since juvenile records are not open to the public, having a previous offense as a juvenile can lead to more substantial penalties if the minor is charged with a criminal offense again. If you are a minor, your driving license may also be revoked for a period of time. 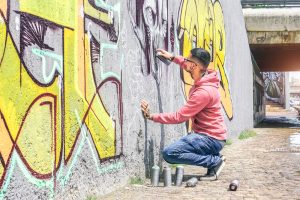 For both adults and minors, there is much to lose if you are convicted of graffiti in New Jersey. On top of the criminal record, the time incarcerated, the fine, the time spent in community service, time spent restoring the surface to its original condition, the reimbursement of the owner for the damage done, clearly what seems like a minor infraction involving graffiti is much more when it leads to a criminal case. You will need the best possible representation in court to avoid these consequences, if possible.

If you have been charged with graffiti in the state of New Jersey, contact The Montanari Law Group as soon as possible. Our criminal defense attorneys are experienced at helping other people in the same situation. We are skilled at presenting your case to the court in the best possible light and our lawyers are alert to any encroachment on your rights under state law and the United States Constitution. We will work hard to explore alternatives that will keep you out of juvenile detention or jail, as well as fighting to reduce the fines, penalties, and charges against you.

If you are facing vandalism or graffiti charges in Wayne, Clifton, Paterson, Newark, Belleville, Nutley, or another community in Passaic or Essex County, our help is just a phone call away at (973) 233-4396. You can also fill out our contact form, and we will reach out to you shortly to provide a free legal consultation.