Taking Care of Your Pension Rights after NJ Divorce

Pensions and divorce are complex topics for the courts to handle because pensions are rarely exclusively for one spouse. 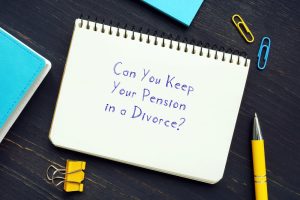 Typically, pensions are commingled as opposed to being entirely possessed by each spouse. Property and accounts obtained prior to the marriage could be considered separate property, but if any of it was used within the marriage, it becomes shared. If you or your spouse has a pension and you are divorcing or considering a divorce in New Jersey, an experienced divorce lawyer at Montanari Law Group can help you contemplate all of the different factors that effect what happens to your pension plan after divorce. You may have more options for maintaining and asserting your pension rights than you realize.

Determining How to Divide Pensions in a NJ Divorce

New Jersey is an equitable distribution state.  This doesn’t mean that the court divides the property 50/50 but most fairly and equitably possible.

Retirement accounts are almost always part of the family estate. Often, it cannot be taken during the marriage—unfortunately, the calculation of who gets what is divided in the divorce agreement. The analysis of how the funds are divided can be arduous and complicated. Spouses keep the money they brought into the marriage but only if none of those funds were used for household expenses such as tuition for the children’s private school or the down payment on a family car.  When money is used for anything outside of the one spouse, it is eligible for equitable distribution.

Because NJ is an equitable distribution state, ownership of assets must be proven.  The court doesn’t simply divide the property right down the middle. The judge analyzes several points when they decide how to divide assets fairly, therefore making it much more difficult to predict the decision that will be made. Usually, it is better to hash out the agreements in meditation without going through a court hearing.

Aspects Examined to Determine the Distribution of Shared Pension Assets

Some of the aspects that the court can consider when distributing the assets are the length of the marriage, each individual’s economic standing, each spouse’s age, the standard of living in the marriage, and each spouse’s contributions to the funds.

The spouse who earned money may claim most of the sum, proposing that their contribution was essentially the most valuable. Still, they were not able to make money had it not been for the other spouse who raised the children and took care of the home, giving up their opportunity to study and work on their careers as well. Although one person contributed financially, the court recognizes the marriage as a team, and domestic support is as valuable as working in the professional world. Earning less is of little consequence in terms of retirement benefits.

Also, the family law system will not allow a significant disparity between the spouses economically. The court does not want one person to be impoverished while the other takes trips to the south of France. An equitable split will prevent one of the spouses from living destitute. The standard of living enjoyed while married is a good measuring stick to divide the assets.  The wage-earner won’t lose everything, but they will have to give up a portion of their pensions.

The division of assets is also considered when looking at the possible future earnings of each spouse. If there is a broad division in the payments between the two spouses, it would be reflected in the distribution of assets.  Since one person has a better chance of earning more money, they are at an advantage in saving money. 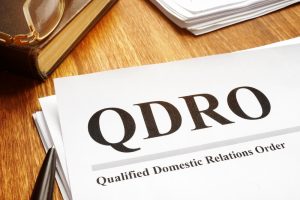 A Qualified Domestic Relations Order is a court order that identifies the person who contributed the assets (the participant) and the non-participant spouse. First, the lawyers from each spouse negotiate how the benefits will be divided.  Then, an attorney draws up the order. When it is ready and accepted on both sides, a family law judge signs it.  Then the QDRO is sent to the retirement plan administrator, who is responsible for distributing the assets by what is instructed in the order. The person who receives the benefits does not have any tax penalties.

QDRO can be used to divide some benefit plans, but not all of them. These are defined benefit plans and defined contribution plans.  Defined benefit plans, also known as pensions, are what the employer pays as part of a compensation package when the employee retires.  Defined contribution plans are where the employer and employee put money away, and the amount grows over time. Payments are usually made monthly and typically stop with the retiree’s passing. These plans include 401k, 403b, 457, thrift, profit sharing, money purchase, stocks, and tax-sheltered annuities.

QDRO’s Limitations and the Plans it Cannot Divide in Passaic, NJ

You cannot use a QDRO to divide the types of plans that you cannot use, include IRA’s, deferred annuities, government or military pensions, or deferred contribution plans.  In your divorce, these plans can be divided, but you don’t need a QDRO. For those, a regular court order will suffice, and for the others, they usually have an agreement that entails a description of how they should be divided.

Division of pension benefits requires analysis of several factors:  When were the pension payments made? If there were contributions made to the pension before marriage, those could be set aside as separate property, as those payments that were made after the marriage. The value of the retirement needs to be determined before and after taxes. Finally, there can be a deferred distribution or an immediate offset.  This is your opportunity to have your share paid during the divorce or exchange your claim for an equal asset such as property or family heirlooms.

A family lawyer can help you analyze and organize your family’s pensions and accounts.  Going through a divorce is incredibly stressful, but having a knowledgeable professional working with you can make all of the difference.  An important time in your life is coming to an end, and dividing your assets can be overwhelming.  Your family lawyer knows what to do to make the split as equitable as possible.

If you are considering divorce or have already begun the process, you can find sound, highly informative advice and representation by contacting the Montanari Law Group.  We dedicate our attention to your concerns and unique needs.  Every situation is different, and we strategize to create the best plan possible for you. From our local Little Falls offices, we provided continued service and legal help with divorce issues to clients in Haledon, West Milford, Hawthorne, Montvale, Wayne, Elmwood Park and surrounding areas in Passaic and Essex County, NJ.

Call (973) 233-4396 or set up your free consultation online. We are ready to create a plan for your protecting all of the pension rights and other benefits you are entitled to during and in the aftermath of divorce.