Hearsay in NJ Family and Matrimonial Law: Nothing But the Truth

Hearsay is defined as non cross-examined piece of evidence offered during a trial or hearing process. Here’s How it Works in New Jersey. 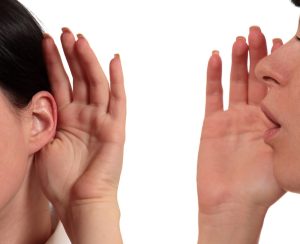 When confronted with the term “hearsay,” most people assume it is not allowed in court. That is not the case. Hearsay is evidence that depends on the credibility of someone who cannot be cross-examined in the courtroom. It can be written, verbal, or nonverbal. When the original laws on hearsay were created, they were extremely narrow, so a statute or exception was made for every legal issue regarding hearsay in New Jersey. Frequently, if the rules and exceptions are met, hearsay is allowed.

Evidence created outside of the courtroom cannot be directly cross-examined and is therefore considered hearsay; conversations had by witnesses, community members, therapists, parents, teachers, friends, family members, social workers, and neighbors who do not offer direct testimony in court. Sometimes their testimony is in writing; other times, it is in the form of conversations held outside of court. Documents such as IEPs (Individualized Education Plans), behavioral reports, notes from supervised visits, and others from the child’s school are examples as well.

Hearsay is especially frequent in family law cases with accusations and counteraccusations that could affect anything from equitable distribution of the household assets to allegations of child abuse. It is offered for “the truth of the matter asserted,” which means its purpose is to bolster the truth of what is being testified to and the credibility of the declarant. Hearsay given as the truth of the matter asserted is inadmissible.

Example of What Is and Is Not Hearsay

Bonnie and Figaro are getting a divorce. Hank is a witness for Bonnie. Hank says that he and Figaro went joyriding in Bonnie’s car, unbeknownst to her. Hank says that Figaro was driving recklessly and speeding down a country road when they hit a sheep. That is direct testimony describing an event the witness not only saw but participated in. If we change his testimony some, it becomes hearsay. When questioned, Hank said that Figaro told him he wanted to wreck Bonnie’s car, so he went joyriding and collided with a sheep, damaging the vehicle significantly. (He said nothing about the condition of the sheep). The testimony becomes “he said” instead of “I saw.”

Some Exceptions to the Hearsay Rule in New Jersey

Yes, there are many. Here are some of the more than 30 exceptions.

An admission by the other party is when something is said by the defendant at a point in time far ahead of the matter, going to trial, and reported by a witness. For example, if Georgia admitted to a friend,” I give our toddler Benadryl every night so she will sleep.” And eight months later, Georgia is being charged with child endangerment, her friend’s testimony will be identified as hearsay, but it will also potentially be admissible because it seems credible.

An excited utterance is a statement made by someone just after a surprising or startling event. The main idea is that statements in this situation are considered more truthful because there is no forethought on the speaker’s part. An example of this is a call to 911. The experience is traumatic, and the caller is assumed to be sincere because of the circumstances. In this instance, a recording of the call could be presented as evidence even if the person who made the call is not testifying as to having made it.

A prior inconsistent statement occurs most when there have been depositions before the trial, and a witness makes a statement in court incongruent with their previous testimony. If the witness claims to have forgotten what they said previously, they can be questioned further and confronted with the text of their answers from the deposition.

A statement for medical diagnosis or treatment is given to a doctor, or another healthcare professional regarding the symptoms being experienced may qualify as a hearsay exception. For example, if you tell your doctor the bruises on your back and arms are the result of a fall, that can be used in your divorce trial to disprove domestic abuse on the part of your spouse.

A public record such as marriage certificates, adoption registry, death certificate, a name change can all be used even though they are considered hearsay. 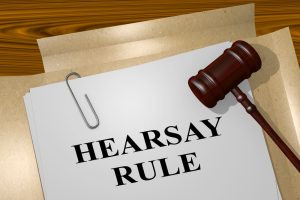 Hearsay in family law trials is very common. Overheard conversations and well-intended extended family offer what they heard that someone had seen or heard without providing any credible witnesses.

In the case of Arrowood v. DiBenedetto, a mother is petitioning that the court take away the night visits her daughter has with her father because she claims that the daughter tells her the father continues to smoke while she is there, even after the daughter’s doctor had admonished the father for doing so. The mother had no direct proof to substantiate what her daughter had said. The judge said that although it was hearsay, another problem was that there was such a small amount of evidence to determine a ruling of such grave circumstances that a decision could not be made on her statement alone.

Contact One of Our Family Lawyers to Prepare Your Family Law Case for a Hearing or Trial in Paterson, Newark, Hackensack, & Jersey City NJ

Hearsay is one part of a very complex legal process. Its exceptions and nuances can make or break your case, which is why you need a legal team who has been there and done that with great success in New Jersey family law cases for decades. Whether you’re filing for divorce, handling child custody, pursuing an adoption, or confronting other family law issues, the lawyers at Montanari Law Group have the experience you need for an exceptional result.

Our dedicated attorneys have the tools needed to build a solid case, no matter what the situation. We are passionate about helping our clients move forward into better times and circumstances.

Call us at 888-877-7985 or (973) 233-4396; you can also contact us online today. We serve individuals and families throughout Bergen County, Hudson County, Passaic County, and Essex County, including in Woodland Park, Ringwood, Hackensack, Montclair, Clifton, Totowa, Hoboken. Don’t wait another minute to start getting the life and future you deserve.